Day One of Racing in Pacific Northwest Complete 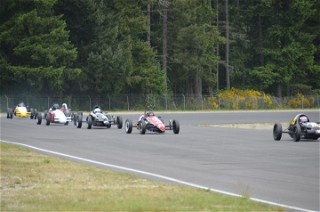 KENT, Wash. (May 24, 2015) – Round Nine of the SCCA Western Conference U.S. Majors Tour was contested at Pacific Raceways as part of a Sunday/Monday doubleheader race over the three-day Memorial Day weekend.

Drivers representing 24 Runoffs-eligible classes took to the 10-turn, 2.25-mile circuit to run their 25-minute sprint races. The sprint races were originally scheduled to last only 20 minutes, but a run group consolidation allowed each race to run an additional five minutes in length. The races were preceded by a pair of 15-minute qualifying sessions that were used to set the starting order.

Here is a summary of the day’s action:

Race One: The Super Touring Lite and Touring 4 classes took center stage during the first session scored by position, instead of best time. Paul Whiting, of Pahrump, Nevada, took the win in STL at the wheel of his No. 57 Honda CRX. Not only did Whiting beat out Thomas Lepper for the class win, but he also scored the overall victory.

In Touring 4, Lance Stewart (No. 13 Ford Mustang) of Coconut Grove, Florida, scored the win as he finished ahead of Kristina Etherington.

Race Two: The second group on the schedule represented a blending of several different classes. The Spec Racer Ford and Spec Racer Ford Gen3 classes were combined with the Spec Miata, B-Spec and Super Touring Under classes for their sprint race.

The B-Spec battle, won by Eric Boucher, of Auburn, California, stole the show in this group. In his No. 35 The Wife Mazda2, Boucher took the 0.481-second win over Derrick Ambrose. While Ambrose still holds a significant lead in the Conference standings, Boucher is still pushing hard to close the gap.

Race Four: In the small-bore formula group, Brian McCarthy, of Sacramento, California, was able to finish in front of a tightly bunched field of Formula Vees. Driving the No. 05 BRM Engineering Formula Vee, McCarthy crossed the line 0.280-second ahead of Marjorie Lundberg.

Race Five: The large-bore formula cars were fairly strung out by the end of their 25-minute race, but Formula Mazda produced a relatively close finish as Michael Ottis, of Portland, Oregon, took the win. Driving the No. 72 Patrick Ottis Formula Mazda, Ottis managed to finish 0.762-second ahead of Mel Kemper.

At the front of the field, Larry Vollum, of Portland, Oregon, cruised to victory in his No. 5 CV Medical Phoenix MV14.

Race Six: The big-bore ground-pounders wrapped up scheduled on-track activities. Erich Joiner, of Torrance, California, was the winner in GT-2, but Scotty White made things interesting. When the checkered flag flew for Joiner in the No. 3 Tool of North America Porsche 997, White crossed the strip just 0.388-second ahead behind.

Tomorrow’s Round 10 of the Western Conference will close out the three-day event at Pacific Raceways. Each of the six race groups are set to run 20 laps or 40 minutes, whichever comes first, with racing starting at 9:40 a.m. (PDT).

Additional information regarding the Majors at Pacific Raceways, including full results, can be found at SCCA.com/PacificMajors.